Using video analysis is an important tool for showing your athletes exactly what they are doing so they can make adjustments.

It’s also great for positive reinforcement when they do something the right way.

You can explain drills and skills to them and demonstrate something yourself (as a coach) the correct way.

But when you can show them clips of themselves, they can get a deeper  understanding, and I think they can make improvements to their skills quicker.

A deeper understanding of how to improve skills

Some coaches film games for review at team practice, which is great for seeing how the players interact and perform together in different situations.

Each player can also look at game film to review their own performance and get a better idea of how they can improve within the team concept.

Or if they are in solo sports like tennis, how they act and react in game situations.

But just as important is to show athletes recordings of themselves  while practicing (doing drills).

It helps them internalize the correct movements and the feelings of success when they are making progress.

That’s why I like to film each player in game-like situations as well as while they are doing drills in practice sessions.

Just make sure you get clips of them doing the skills the correct way in addition to some clips of them where they need improvement.

Something magical happens when athletes can see themselves doing things correctly as soon as it happens.

They are still feeling good from your positive feedback, and when you show them a video clip of themselves doing it, it has a much stronger impact than if you just told them “good job”.

The combination of them doing the skills correctly, hearing you compliment them, and then actually seeing themselves do it is very powerful.

The combination of them doing the skills correctly, hearing you compliment them, and then actually seeing themselves do it is very powerful

That way, they can review the clips whenever they want.

It helps them to mentally reinforce all the correct movements and skills by watching the clips repeatedly…which they will do if they have the clips on their phone.

A brief history of video analysis in sports

The use of video analysis wasn’t extensive until the 1990’s.  And even then it was used mostly by professional and college teams.

More recently, Kobe Bryant talked about his use of video to help him get a competitive advantage.

He not only used video to analyze his own game, but he got videos of some of the all time great NBA players so he could analyze their signature moves and habits.

Going back further, there were certain players who started using video to help their own performance back in the 1970’s and 1980’s.

One of the most famous was MLB Baseball Hall of Famer Tony Gwynn.

He asked his wife to use their VCR to record all of his at-bats during his games.

This allowed him to analyze his stance, movements, and swing in the batter’s box, as well as how the pitchers would pitch to him.

He claims that this use of video helped him the most in his career.  (He is regarded as one of the best hitters of all time).

“With video, it’s a lot easier to remember.”

What to record and show your players

For your sport, you’ll have to decide what angles you want to record that’ll help your athlete.

As an example, when I am teaching free throw shooting, I’ll set up the camera in these angles:

All these together give me a better understanding of what the player is doing correctly and what they need work on.

I not only like to show them normal speed, but also slow-motion so they can get a better look.

An example of what to record for video analysis

Here’s an example I recorded a few years ago to show players what to look for with great free throw shooting.

NOTE: I didn’t have a top notch HD camera or fancy editing equipment, and you don’t need those either.  Just as long as you can get some basic angles and good samples for your athletes to see, you can help them. Most phones today have everything you need for taking great video.

If you are experienced with editing, you can take photo snapshots from the videos and use simple graphics to show athletes how they look in terms of their mechanics. (The pics below are samples I did of this).

If you coach baseball pitchers, you might want to use the same angles:

You only need 3 things…

As for equipment, all you need for video analysis is 1) a phone or a basic video camera.  And 2) a decent tripod that will hold the camera or phone in position while you conduct your sessions.

Again, the most important thing to remember is to find out 3) what your specific players need help with and then decide which angles will capture their movements the best for you to show them what they are doing correctly and what they need more work on.

* * * UPDATE: There is an app that is perfect for incorporating video analysis into your training.

With CoachNow, you can create a “Space” for each of your players.  Think of each athlete Space as a private training area for you and the athlete to be able to interact with each other.

This allows for an enhanced training experience for both of you.

One of the great functions of CoachNow is that it not only lets you record video clips, it has editing functions that allow you to draw lines, create slow-mo clips, and do voiceovers for audio breakdowns of the athlete’s technique in those clips.

This can help you in several ways…

Also, the ability to give feedback during the week when you aren’t face-to-face is perfect for elevating your training to something far above just doing on-site drills. This remote coaching aspect is an extra benefit for the athlete because it’ll be like having a coach in their pocket (and you can raise your training fee rates for this access).

There is a monthly fee (or a discounted annual fee if paid in full) for CoachNow, but that investment is more than paid for with the training fee you charge with only one student.

I really think this a must have for every training coach.

Go to CoachNow.io to find out more about this great training tool.

NOTE: I receive an affiliate commission from CoachNow when you use the app after clicking through these links.  I have personally reviewed and tested many of the other private coaching apps, but CoachNow is the best I’ve found, which is why it’s the only app for private and remote coaching that I recommend. 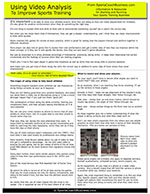 Links to check out:

Hey, if you’d like to find out more about starting and running your own sports skills training business, I’ve put together a 4-page starter guide that answers the 3 questions I get most.  Just go here to get it.

If you want the full 34-page downloadable pdf guide, get it here.    And if you want the printed version of the book, you can get your copy at Amazon.

This is one of the most fun ways to make some extra money.

Please check your inbox for the confirmation email.